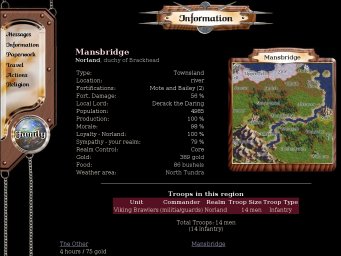 BattleMaster is a game played from your browser where grand stories unfold created by the interactions and imaginations of players. It focuses on battle, teamwork, and roleplay where the power is in your hands to create your own destiny and alter the course of history, forever. It takes place in a medieval setting where you create a character and join other players in a realm of your choosing. Your character will be of noble blood, start off as a Knight, and as your ambition demands, perhaps one day reach the ranks of Duke, General, Ruler, or more. Your character will fight alongside their realm's fellow nobles against nobles from enemy realms in order to win wars. Cities will be conquered, regions will be defended, and blood will be spilled in the name of honor, glory, culture, and power. Take part in forging alliances, destroying empires, fighting holy wars, and more in an ever changing landscape created by players, for players, where the victors are envied and enter the pages of history.

Battlemaster is a lightweight slow paced game designed to be played alongside your other activities with turns every 12 hours at 6AM and 6PM UTC . Depending on your desires and your characters' tasks, you can spend as little as 10 minutes per day on your characters, or over an hour based on what you want to do, roleplay, and achieve each day. A typical response time to letters and messages is measured in hours, not minutes, and many play Battlemaster from their smartphone while on the go.

Casually fight wars by wielding sword or bow, devise military strategy and lead fellow nobles by commanding the armies of your realm, vie for power among ambitious nobles and realms by engaging in political intrigue, spread your religion's faith and embark on a crusade for purposes only known to you: these are some of the many choices you will make. In Battlemaster, you create your own destiny, and all that stand in your path make victory that much sweeter when you overcome all that oppose you. Join Battlemaster now, every day is another chance for you to attain fame and honor!

Looking to flex your coding skills? BattleMaster is under active development by a focused team of volunteers. We invite you to join us and take an even deeper part in this ever growing universe! New features are regularly added, gameplay is balanced and tweaked, and more is done to continuously improve the game. You can talk directly to the developers at the forum, or on the discord

The Hinterlands playtest is still underway, and has received a massive update! In addition, starting later this week, all playtesters will receive 50 gold per month active deposited into the family wealth of their **main family**. This will also be granted retroactively to all players still active in the playtest. Going forward, this bonus gold can go past the 20k family gold cap.

Major Changes ...Plus a bunch of minor changes and bugfixes!

At long last, and with apologies for the delays, I am delighted to announce the opening of the Hinterlands Playtest!

This is open to all players who have been in the game at least 30 days, and you can find the link to create your account, along with further information about the Playtest, in the box to the right of your Heraldry on your player page, underneath the donation options.

Please note that the Playtest is still in Startup state, meaning no turns will yet be run. It will also have much more direct admin intervention, including manual database changes, abrupt code changes, and the like, so please do not be alarmed if you see weird things happening.

When Dwilight was originally made, the "geographic" map—that is, the one without the region names and borders—of the final version was lost. Over the past few years, thanks to the efforts of some valiant player volunteers, a very close approximation to the original Dwilight map was constructed in the Age of Wonders map editor (the program used to make all the BattleMaster maps), and its borders redrawn to match the slight variations in positioning required by this re-creation.

The fruits of that effort are now live, with the Dwilight map images having been replaced and the data in the database updated to reflect the change. Please note that this will also mean some slight changes in the distances between regions on Dwilight, and that you may need to clear your browser cache if you are seeing inconsistencies in the map.

Many thanks to the players of the Wilde and Felsenbach families for their assistance with this.

For the last couple years, the game has begun to shift more and more in a direction I do not recognize as BattleMaster. I think Gildre was the first to see this shift in values away from the values that once attracted us to this game and community, but its taken myself longer to recognize the same. He wrote of too much of the game being in discord, not liking that metaplay, missing ingame surprises instead of being seen discussed on discord, and feeling like he was part of an old boys club, that he tried to remedy these, but found "stone walled resistance", which reinforced his decision to go.

I didn't realize it until I was writing this message, reviewing notes I'd made of various thoughts these last few weeks, but my experience echoes his. Over that time, several volunteers and I have tried to address those issues and more, to no avail. The last few months I've recognized a deep burnout within myself after November. There comes a time when one asks oneself how much energy and stress should go into a hobbyist community game for little result. For most of the last decade, BattleMaster has been my escape from stress, but it was recently I recognize that BattleMaster had become the stress.

I love this game and community dearly, it has been regular part of my life for a significant portion of my life. More than half of my life. I grew up with this game and grew as a person because of Tom and many other players here. Out of respect for this game and its community, I do not want to get into the dirty laundry of specific issues, and there are aspects of concern I don't address here because I didn't feel capable of balancing the measure of my words, but I also think the community needs to know why volunteers and players are becoming disillusioned and not have it swept under the rug; navigating this line seems like trying to thread a heavy chain through the eye of a needle.

The game has shifted from being one where your hand was not held, there were consequences for ones ingame actions, a sandbox to play within, spontaneity of roleplay, dynamic wars to one of handholding, insulated from consequences, metaplay, preconceived roleplays, and war declaration rules-lawyering bureaucracy. Gildre spoke of an 'old boys club' when he left, and I struggled with that one, still do even, but at the same time, I have begun to see how some players have been given more opportunity and leniency than other players, sometimes even the opposite standard, and that is not right. I can no longer in good conscience claim that discord moderation is applied consistently and fairly, be okay with having secret developers because they want to avoid players who don't like them knowing they are developing code (or having developers with a history of moderation issues), or represent what BattleMaster has become and is becoming.

I do not plan to become entirely absent, though I will probably maintain a distance for some time. I will still be around the Lemuria Community, but I cannot in good conscience stand by and be part of what is happening. This isn't about the wider community, but about that part of the community involving the game.

Please, if you're going to raise these topics for discussion, do so from a position of love for this community, not being right. You are responsible for the community you create.